Every attorney has his/her own intake survey (generally varying by incident type) and method of working a case.  Investigators in the field also have their own methodology that intends to synch with the attorney’s needs. Below are several situations that our investigators have encountered in the field, and recommendations based on these incidents.

Situation: On numerous occasions we’ve had to locate a client who has moved without notifying his/her attorney.

Recommendation:  Obtain the complete contact information (phone, address, email)  of at least 2 relatives and 2 friends NOT living with the client.  Drilling deeper,  obtain the DOBs of the emergency contacts.  This may appear to be a rather aggressive suggestion but,  at least 2 of these 4 contacts should be over 25 years old. Generally, adults above 25 years of age are employed and therefore, more easily trackable than those younger or retired.

Situation: I’m sure you’ve all seen a PAR (Police Accident Report) w/a witness listed as “Johnny, 917-555-1234”. (or same, similarly incomplete police report).   No address, no surname and a cell phone that may or may not be active in 2 weeks, let alone 2 years.

Recommendation(s):  1. Call “Johnny” immediately.  Obviously,  the first objective is to determine his knowledge of events regarding your client’s matter.  2. Obtain his full contact information (add’l phone number, address, email) and an identifier, (We suggest a DOB.  Many people are reluctant to release their SSN.)  3. Obtain an emergency contact for him.   4.  Check the contact info every 4 -6  months until the case resolves.

3. Professional photographs of the accident scene, especially if citing defect or disrepair.

Situation:   Several years ago, we had an exterior premises trip and fall situation wherein we were called to investigate the scene approximately 4 months post-incident.  The injured person made several natural and unintentional mistakes: 1. Not realizing the extent of his injuries, he did not call 911.  There were no on-site witnesses and no responder witnesses, and  2. When he returned a week or so later, after receiving medical attention, he’d taken photos of the accident scene but the shots contained shadows running across the defect rendering it difficult to determine the exact nature and severity of the  defect.   He was to go back and re-shoot the scene but did not.  4 months later, no defect, no repair record.  The building owner would not disclose any defects and neighbors may be non-cooperative, especially if they too are tenants of the same landlord.

Recommendation: Send out a professional to photograph the accident scene ASAP.  Don’t expect the client to have useable photos or to return to the location of occurrence and accurately record the scene.  Bear in mind, however, that the defect may have permanently “disappeared” and there may not always be a repair record.

4.  If it seems weird; it probably is.  Check all possible contributory factors.

Situation:  Claimant fell UP the stairs.  She wasn’t carrying bags, wore flat shoes; no drugs or alcohol were involved.  No defects, liquids or debris on the ground.

Recommendation: Measure everything.  After taking detailed step and rail measurements, we realized that a) the steps were unequally sized – from the height between them to the protruding lip of each step (which was excessive at the point where she was caused to trip) and b) the rail would have been out of reach from her position regardless, with no secondary wall rail in place.   Rarely do people slip, trip or fall for no reason (unless there is an underlying medical condition).

5. Always check to see if drugs and alcohol were involved. (Defense)

Situation:  Building maintenance crew member claims to have fallen off of a defective ladder.  The ACR showed extremely high bp readings; 3 taken at 15 minute intervals by responding EMS – well above the readings that would be expected even in a  such a stressful situation.

Recommendation: Check the medical history.  The individual was on Lipitor and had not taken his medication as prescribed for several days before his fall.  (He’d also commented to several co-workers earlier on the day of incident that he was feeling “dizzy”.)  There was absolutely nothing wrong with the ladder, the area surrounding it, nor was he working at a height requiring specialized safety equipment. 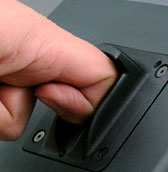 UPDATE:  A short while back we brought your attention to a start-up New Mexico company, Tru Touch Technologies,  busily developing a non-invasive blood alcohol testing device  currently for use in public testing (police) and private  (airlines, construction, rehab facilities… ) sectors .  The TruTouch sensor operates by using near- infrared technology through the skin’s layers in testing for alcohol and drugs in one’s system.

“TruTouch Technologies is commercializing a novel, optical based, non-invasive sensor that quickly and accurately measures alcohol intoxication while simultaneously verifying user identity using light through the skin. The sensor is fast (less than 20 seconds), easy to use, self-administered, and cost-effective.”

How it works: Press finger to tab, results output.  Watch the video:

“As it becomes clear to every employee that a Target Zero Alcohol-Free Workplace is being actively tested by using TruTouch, on-duty impairment by alcohol will soon be a thing of the past. Employees will fundamentally change their alcohol drinking habits and alcohol usage will rapidly dwindle and ultimately disappear from the workplace.

TruTouch is now operational in many US and European companies/agencies.

Rarely do we endorse a product or service but TruTouch is a device whose time has come.

The Beacon Bulletin is brought to you by our parent company, Beacon Network Investigations, LLC.

For the trial law and legal community.

We provide verified information and expert paralegal services by experienced professionals. We DON'T dispense legal advice, respond to anonymous queries or black hat your enemies for you. (Internally, however, points are allotted for perfectly wordsmithed compliments.) We are NOT attorneys or a law firm.

We DO hope to inform. That's our business.